ALBUQUERQUE, N.M. –When you’re an operator or engineer at a nuclear power plant, there are things you want to know long before you’re faced with an emergency.

Reactor safety experts from Sandia National Laboratories and elsewhere are sharing lessons learned in Japan’s Fukushima Daiichi nuclear accident and other severe accidents that pushed nuclear power plants past their limits. They are passing on what they know to operators and engineers through the Technical Support Guidelines (TSG) Skillset Workshops, developed by the General Electric Boiling Water Reactor (BWR) Owners’ Group. 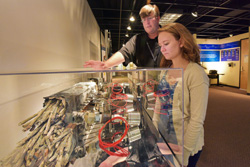 Nuclear engineer Douglas Osborn shows student intern Anastasia Fox the results of an experiment that resulted in the zirconium cladding of a fuel cell catching fire. Osborn is one of the Sandia engineers sharing the lessons learned from mining Fukushima data with nuclear plant operators, to give them the knowledge they’ll need in the unlikely event of an accident. (Photo by Randy Montoya) Click on the thumbnail for a high-resolution image.

The workshops seek to demystify what happens during an accident, to help engineers/operators learn what decisions they might need to make in the event of an accident at their plants and to provide insights into the non-intuitive nature of accidents. To date, workshops have been held in Taiwan, Japan, and at Sandia and elsewhere in the U.S., with more workshops planned for Switzerland, Mexico, Spain and the United States.

What to expect next

“By walking participants step-by-step through what happened during a real-world accident, operators/engineers can use that information to know where they are in the accident process, so they know what to expect next, particularly when the accident could progress in ways that are unexpected,” said Randy Gauntt, manager of Sandia’s Severe Accident Analysis Department.

Sandia brings decades of experience to the workshops. Its analytical software, developed for the Nuclear Regulatory Commission (NRC), was used to advise the NRC, Department of Energy and TEPCO, the Tokyo Electric Power Company, as the accident progressed at Fukushima Daiichi.

Sandia began studying responses to severe nuclear accidents shortly after the Three Mile Island incident in Pennsylvania in 1979, an event that radically altered the future of nuclear power in the U.S. Since then, Sandia has provided research and support for investigations into severe reactor accidents to industry worldwide and to U.S. and foreign regulatory agencies, and serves as the NRC’s principal contractor for severe accident research.

Not all plant accidents are the same. Some things about Fukushima were surprising. “Pumps that should have failed in a few hours ran for days, well beyond their expected design basis,” said Douglas Osborn, a technical staff member at Sandia.

Osborn said that in the Fukushima accident, the expected reactions that create hydrogen led to explosions in the Units 1, 3 and 4 reactor buildings.

“As the core heated to temperatures of more than 1,800 F (about 1,000 C), the fuel cladding metal reacted with the steam in an exothermic oxidation reaction, leading to rapid temperature increase to the point where water didn’t provide sufficient cooling and created large amounts of hydrogen. The cladding and fuel began to melt, while cladding oxidation continued,” Osborn said.

He said the reactor core material failed at the bottom of the reactor vessel, and the molten core material freed water, hydrogen, carbon monoxide and carbon dioxide from the concrete as well. When the core material mixed with zirconium and steel oxidized on the concrete, large quantities of combustible gas, hydrogen and carbon monoxide is generated, creating additional heat. The combustible gases may have burned above the molten pool or may have accumulated with the other gases to pressurize the containment vessel, Osborn said.

Many of these accident progressions are still being analyzed with the data from the Fukushima accident to determine the conditions of the core and provide insights that will help engineers and operators prevent another accident.

Training the next generation

The TSG Skillset Workshops help operators/engineers understand severe accident phenomena and timelines so they can recognize critical events, and helps them identify limitations of tools and equipment, including those needed to assess and predict the accident’s progression.

“The next generation of nuclear professionals understands better the events that have impacted the industry through lessons this generation has learned,” said Bill Williamson, chair of the BWR Owners’ Group Emergency Procedures Committee.

Williamson and others in the group are working to ensure that workshops like the one at Sandia transfer vital information that allows nuclear professionals to better interpret severe accident instrument readings. Williamson said severe accident conditions don’t lend themselves to simple, easy-to-understand instrument readings, increasing the importance of the workshops.