Sandia wounded warriors discover they were united in battle years ago

ALBUQUERQUE, N.M. — Jason Shelton and John Bailon left a Sandia National Laboratories Military Support Committee meeting side by side, sharing stories of combat in Iraq. Bailon talked about a day in the summer of 2005 when his Marine unit was called to rescue a small Joint Special Operations team holed up and taking mortar and gunfire in a house next to a school booby-trapped with explosives. 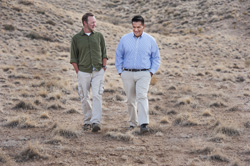 Jason Shelton, left, and John Bailon reminisce while walking in terrain at Sandia National Laboratories that reminds them of Iraq. They both fought for the U.S. military in Operation Iraqi Freedom. (Photo by Randy Montoya) Click on the thumbnail for a high-resolution image.

The hair stood up on Shelton’s neck.

“It sounded really familiar,” he said. “I asked if the mission involved bombing the building. John said it did. It was crazy. There could not have been two missions involving a Marine unit supporting a Special Operations team at a school at that exact time in Iraq. I was on the team that John’s unit came to help.”

Bailon said it became clear as he and Shelton talked that they were within 100 yards of each other during the tense conflict. “It was a weird, strange coincidence,” Shelton said. “For the next few days we both kept saying, ‘I can’t believe it.’”

Both Bailon and Shelton are in Sandia’s Wounded Warrior Career Development Program, which opens specific jobs at the labs to military veterans injured in combat. The program offers training and education so that combat-injured veterans can catch up to their peers who entered the civilian workforce instead of the military.

Shelton was an Air Force combat controller and part of an elite counterterrorism team that tracked prominent members of al-Qaida, the Taliban and other militant groups. On that day in Iraq, his team was alerted to the possibility that the school was being used to hide weapons and fighters.

“They use schools, hospitals and mosques, thinking we won’t go there,” Shelton said. “We were dropped off in the desert and walked into this school.”

A K-9 team led the way in the dark of night, testing equipment that allowed the handler to monitor what the dog was seeing without being next to him. “That dog ended up saving everybody’s lives,” Shelton said. “He alerted, and the handler could see that they had booby-trapped the school with trip wires and explosives and built fighting positions in stairwells. We didn’t know how many people were in there waiting for us. It was bad.”

The team retreated to a small house next door and called for help. “It was too dangerous to send guys into a situation like that,” Shelton said. “When things happen at that scale we request a kinetic strike in which the Air Force comes in and destroys the building. It was the middle of the night, so there were no kids around.”

The sun was rising as the strike was discussed, not a good sign for Shelton and his team, who did not go out in daylight without the safety of support aircraft. “We knew if we stayed there much longer we’d have to stay all day and into the next night, and we didn’t have provisions,” he said. “We couldn’t leave because there were enemy troops in the building and someone had to keep ‘eyes-on’ the school until a decision could be made whether or not to destroy it.”

Bailon’s nearby Marine unit had a Quick Reaction Force (QRF) on standby. “They had assets we didn’t have,” Shelton said. “With their numbers and tanks they could secure the area better than we could.”

Shelton’s team asked the QRF for help and at the same time began taking mortar and machine gun fire from near the school. The team held on while Marine tanks rolled in and secured the area. “They surrounded the school for us,” Shelton said. “We were taking fire, we were getting mortared. John and his guys got there and took control. It’s nice when people bring tanks. With the Marines there, our helicopters could come and get us out.”

Bailon said his unit had jets, choppers, tanks and plenty of Marines, while Shelton worked in a small team. “They needed our help and we all got down there,” Bailon said. “It was a dangerous situation.”

Shelton said the house that sheltered his team didn’t provide much protection, especially against mortars. “Having those guys show up was huge,” he said. “Our small group was limited in what we could do.”

Bailon said the Marines received permission to destroy the building. “It was obviously being used for something other than a school,” he said.

The story has a tragic postscript. The Marines left six snipers to watch the school site after the mission ended. They were later ambushed and killed. Five of the bodies were recovered by the Marines, but the sixth was missing. Shelton’s team went into a nearby city and recovered the body. “We needed all our assets to find him and we did. We brought him back to the Marines,” Shelton said.

After leaving the military, Bailon, a native of Shiprock, N.M., was hired into the Sandia’s Wounded Warrior program in 2012, and Shelton, who is from Indiana, was hired this year.

“It was pretty shocking,” Shelton said of learning he and Bailon were in the same battle in Iraq. “It’s a very small world to know we were that close over there and now we’re both working at Sandia and in the Wounded Warrior program.”