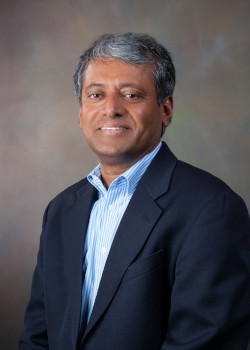 Babu Chalamala, an engineer and manager of Sandia National Laboratories’ energy storage group, was recently elected fellow of two prestigious national societies, the American Association for the Advancement of Science and the National Academy of Inventors. (Photo by Lonnie Anderson) Click on the thumbnail for a high-resolution image.

According to AAAS, Chalamala was selected to be a fellow “for technical contributions and leadership in grid energy storage technology, his research contributions to electronic materials and devices and committed service to the global science and engineering community.”

“I believe that I’ve had an impact in grid storage as a thought leader, providing the vision for where we need to go in R&D, engineering and what are the big things we need to focus on as we consider the future of the electric grid,” Chalamala said. “Being elected fellow of these two societies means I’ve made enough of an impact over my career to be recognized by my peers.”

AAAS is the world’s largest general scientific society and publisher of the Science family of journals. Since 1874, AAAS Fellows have been a distinguished group of scientists, engineers and innovators who have been recognized for their achievements across disciplines ranging from research, teaching and technology; administration in academia, industry, and government; and excellence in communicating and interpreting science to the public.

Among these AAAS Fellows are 29 current and former Sandia researchers and executives including Susan Seestrom, Tina Nenoff, Jerry Simmons and the late Nancy Jackson. While typically inducted at the annual AAAS meeting in February, the 2021 fellows will be celebrated later this year when an in-person gathering is feasible from a public health and safety perspective, the association announced.

The National Academy of Inventors is an organization of universities and governmental and non-profit research institutes, with over 4,000 individual inventor members and fellows. It was founded in 2010 to recognize and encourage inventors with patents issued from the Patent and Trademark Office, enhance the visibility of academic technology and innovation and translate the inventions of its members to benefit society. Election as an NAI Fellow is the highest professional distinction accorded solely to academic inventors, according to the academy.

Former Sandia Fellow Jeff Brinker was the first Sandia researcher to be elected a fellow of NAI. The 2021 NAI fellows will be inducted into the academy at the annual meeting of the National Academy of Inventors this June in Phoenix, Arizona.

From microelectronics to massive batteries

Chalamala came to Sandia in 2015, after spending about a decade in batteries and grid-scale energy storage research and development. He was the founder of a lithium-ion battery start-up company and then was part of an established silicon materials and renewable energy company where he led the development of an energy storage business unit. During the first part of his career, Chalamala focused on flat-panel display technology and microelectronics. Most of his patents are from this early work.

While at Sandia, he has focused on steering Sandia’s and the Department of Energy’s energy storage research and development efforts in new low-cost battery technologies, understanding safety and reliability and improving power conversion systems. His group also develops open-source software tools to assist electric utilities in assessing the value of energy storage systems.

Another important part of Chalamala’s work at Sandia has been reaching out to state regulatory bodies across the country to improve their understanding of energy storage, and operational and performance aspects they need to be aware of as they develop their policies.

When not working, Chalamala is very involved in a number of professional societies. He has been a member of the Institute of Electrical and Electronics Engineers for 38 years and is currently the chair of IEEE’s energy storage and stationary battery committee. He was also elected as an IEEE Fellow in 2014. He has also been an active member of the Materials Research Society and the New Mexico Academy of Science, where he helps with outreach programs for high school students and teachers interested in science. Chalamala also mentors students and guest lectures at a number of universities including Washington University in St. Louis, Texas Tech University and The City College of New York.

In regards to his election to two national societies, Chalamala said, “These recognitions are a reflection of the outstanding work of the energy storage team. It is also an indication of the prominent role of Sandia in grid storage.”