LIVERMORE, Calif. –Sixty years ago, the Giants played baseball in New York and the Athletics in Kansas City, Dwight Eisenhower was president and Sandia National Laboratories opened its California site in the city of Livermore, which at the time had a population of under 10,000.

Because of Sandia’s California site and Lawrence Livermore National Laboratory, by 1970 the city’s population nearly quadrupled to 38,000 people. Today, Livermore is home to about 85,000 people.

What: Sandia will commemorate the anniversary with a community event in downtown Livermore. The event will feature technology displays and demonstrations, national security speakers, hands-on science activities and recruiting. Media representatives are invited.
When: Saturday, May 21, 10 a.m. to 2 p.m.
Where: Bankhead Theater, 2400 First St.
Contact: Patti Koning at pkoning@sandia.gov or (925) 294-4911 with further questions 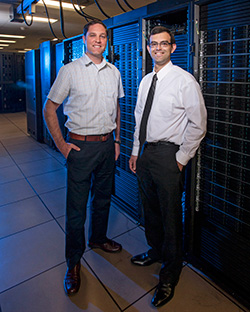 “We take great pride in all that has been accomplished at this site over the last 60 years and want to share this with the community,” said Marianne Walck, vice president of Sandia’s California site and the Energy and Climate program. “This event is a chance to showcase some of the important work that happens here.”

The breadth of Sandia/California’s work will be on display in the theater lobby. Highlights include:

The human resources department will present another aspect of Sandia’s California site — as a workplace. Recruiters will be on hand to share Sandia careers and job opportunities.

“We are fortunate to work in such an incredible place full of natural beauty, wonderful people, history and a vibrant economy,” said Walck. “We invite the community to share in the celebration of Sandia/California’s first 60 years and what we hope to achieve in the next 60 years and beyond.”