ALBUQUERQUE, N.M. — Sandia National Laboratories is well-known for designing reliable and resilient microgrids for military bases and vital city services. Now, Sandia researchers are working with NASA to design one for the moon. 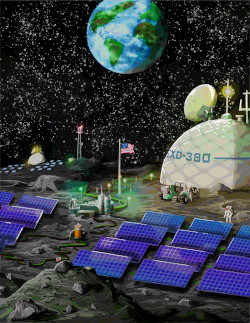 An artistic rendering of what a resilient microgrid for a lunar base camp might look like. Sandia National Laboratories engineers are working with NASA to design the system controller for the microgrid. (Illustration by Eric Lundin) Click on the thumbnail for a high-resolution image.

This is not the first time Sandia has partnered with NASA to power equipment on the moon. In fact, Sandia provided the technical direction for the radioisotope thermoelectric generators that powered the lunar experiments placed by many of the Apollo missions.

NASA’s plan for its concept Artemis lunar base is that it will serve as a technology proving ground for the eventual human exploration of Mars, said Jack Flicker, a Sandia electrical engineer. The base camp concept consists of a habitation unit — complete with room for up to four astronauts — as well as the potential for separate mining and fuel processing, called in-situ resource utilization, facilities. Early Artemis missions will include short stays at the base camp with the goal to build up to stays of two months at a time.

The mining and processing facilities could produce rocket fuel, water, oxygen and other materials needed for extended exploration of the lunar surface while decreasing supply needs from Earth. This facility will be located far away from the base camp — so other science and technology activities conducted there won’t be disrupted — but the electrical grid for the two units will be connected during emergencies for resiliency and robustness, Flicker added.

One part of the Sandia team, that includes Lee Rashkin and Dave Wilson, is designing an electrical system controller for the mining and processing center’s microgrid. NASA is designing the electrical system controller for the habitation unit, as the system will be very similar to the International Space Station’s direct current electrical system, Flicker said. Flicker and his part of the team are developing the system that will connect the two microgrids and are studying the power flow and operation between the two microgrids.

“There are some very important differences between something like an ISS-type microgrid to something that has the extent of a moon base,” Flicker said. “One of those differences is the geographic size, which can be problematic, especially when running at low DC voltages. Another is that when you start to extend these systems, there will be a lot more power electronics as well as a lot more distributed energy resources that will exist throughout the base. Sandia has been looking at microgrids with a lot of distributed energy resources for quite a long time.”

Distributed energy resources are smaller sources of electricity such as solar panels and wind turbines, while power electronics are devices such as converters that keep electrical systems operating within specifications.

Rashkin, an electrical engineer, and Wilson, a control engineer, have been designing the software to regulate the electricity of the mining and processing center since early summer 2021. Wilson compared their controller to the cruise control in a standard automobile in that it maintains an even voltage level on the grid, despite changing external situations. 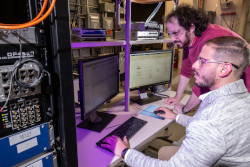 Sandia National Laboratories electrical engineers Rachid Darbali-Zamora, front, and Lee Raskin test out an algorithm on a hardware-in-the-loop set-up at the Distributed Energy Technologies Laboratory. (Photo by Rebecca Gustaf) Click on the thumbnail for a high-resolution image.

The controller needs to be able to maintain an even voltage level on several different timescales, from less than a thousandth of a second to seasons. At the highest level of the control software, on the scale of minutes to seasons, people can control which solar panels generate power and what power-using devices are turned on, Wilson said. However, at the lowest level, at less than a thousandth of a second, the controller needs to operate rapidly and automatically to maintain outputs at the required levels. They are primarily focused on the middle level of control, Rashkin said.

“Our goal is to come up with a lunar energy power management system that can efficiently maintain a level system on all those timescales,” Wilson said. “We have a specialized Secure Scalable Microgrid facility and control-system-design methodology that analyzes this. The facility also has specialized energy storage emulators that can help us determine the specifications for how much energy storage the base needs and their requirements.”

The Secure Scalable Microgrid Testbed is a unique Sandia research facility the team will use to fine-tune their control system. They will also use the testbed to study questions about power system controllers and the interactions between distributed energy resources, energy storage and power electronics on a DC microgrid that is a scaled and simplified representation of the eventual lunar microgrid, Rashkin said. Most terrestrial microgrids, and terrestrial electrical grids in general, run on alternating current AC power.

Like a high-end model train set, the testbed consists of three interconnected DC microgrids with custom-built electronics to mimic different power-production systems and devices that use electricity. The power-production systems they can mimic include diesel generators, photovoltaic arrays, energy storage emulators, and power converters. Each of the emulators can be controlled by a computer, and the microgrids can be configured to test an endless variety of scenarios, Rashkin said. This provides an excellent platform for running repeated experiments with slightly tweaked control software to compare how the system responds, he added.

“The goal here is top-down engineering: we’re trying to determine the control design first, come up with the specifications for the energy storage and then NASA could use those specifications to get the flight-ready components that meet those specs,” Wilson said. “A lot of the time people will do the reverse, they’ll bring you a battery and say, ‘make it work’ Which may degrade the microgrid performance.”

The second major focus of the Sandia researchers is developing the system that will connect the mining facility and habitation unit microgrids for resiliency and robustness. There are two primary ways to get resiliency in a microgrid, Flicker said. One is to have the ability to flexibly route power where it’s needed. The other is over-size everything to ensure there is enough power even if multiple things fail, Flicker said.

“Usually, we have some combination of those two, where it’s oversized to some extent, but you are also able to flexibly route power how you need to within a microgrid or between independent, yet cooperative microgrids like we’re exploring for the moon,” Flicker said. “In a contingency event such as an energy storage system failing during an eclipse, we want to be able to port the power at the mining facility over to the base camp to keep astronauts safe.”

Flicker’s part of the team is also exploring how the connection between the two microgrids could operate. They’re studying the impact the distance between the mining facility and habitation unit has on transfer efficiency and stability, whether they’re five miles apart, or 20. The team is also determining the optimal voltage the connection should operate at, and whether it makes sense for the connection to stay DC or if NASA should convert to AC to make the trip and then back to DC once it reaches the habitation unit.

Sandia’s Distributed Energy Technologies Laboratory is used to study the integration of renewable energy resources such as wind turbines and solar panels into larger energy systems. One of the strengths of this lab is hardware-in-the-loop experiments. These kinds of experiments involve connecting a real piece of hardware to software that can subject the hardware to a variety of simulated scenarios including catastrophic blackouts and weather conditions, Darbali-Zamora said. These experiments are an intermediate step between pure simulation and field tests, he added.

“With this DC power-hardware-in-the-loop set-up that we’re building in the lab, we can test power converters, the impedance of electrical lines between lunar facilities, we could also test actual energy generation and storage devices,” Darbali-Zamora said. “Basically, we can use it to study a variety of situations so we can design a system that is self-sustaining and can continue operating even if a solar panel array goes down.”

The team will also use the Emera DC microgrid on Kirtland Air Force Base to see how a power-electronic-heavy system can operate and port power as needed in low-energy contingency scenarios, Flicker said.

Of course, the whole Sandia team works closely together, Flicker added. For example, they are using toolboxes from the Secure Scalable Microgrid testbed, and some of NASA’s toolboxes in their computer simulations. Eventually they even plan to test Wilson’s controller in their connection simulations, Darbali-Zamora said.

“Even though this work is for a microgrid on the moon, the research is also relevant to creating resiliency for communities on Earth,” Darbali-Zamora said. “I’m originally from a small town in Puerto Rico. I hope that some of the lessons that come out of this project in terms of resilience, are lessons I can implement back home.”

This project is funded by the Department of Energy’s Office of Electricity as part of a DOE-NASA partnership to combine the expertise, experience and research facilities of both federal agencies.