ALBUQUERQUE, N.M. — A Sandia National Laboratories team has designed and synthesized nanoparticles that glow red and are stable, useful properties for tracking cancer growth and spread.

This work is the first time the intrinsic luminescence of metal-organic framework materials, or MOFs, for long-term bioimaging has been reported, materials chemist Dorina Sava Gallis said. Fluorescently-tagging tumors, or other specific kinds of cells, is a new, powerful method to image inside a body. 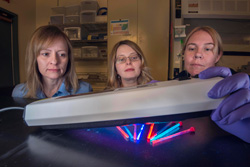 Sandia National Laboratories researchers Lauren Rohwer, left, Dorina Sava Gallis, center, and Kim Butler are members of a team that has designed and synthesized metal-organic framework nanoparticles that glow red or near infrared for at least two days in cells. This could prove useful in tracking the spread of cancer cells. (Photo by Randy Montoya) Click on the thumbnail for a high-resolution image.

MRIs, X-rays and ultrasounds are powerful bioimaging methods to diagnose diseases. However, these methods each have their limitations and generally aren’t used to treat diseases. For years, scientists have been searching for theranostic agents, materials that have both therapeutic and diagnostic uses.

MOFs are one group of chemicals with great potential for imaging and treating cancer and other diseases. These tinker toy-like molecules have metal “hubs” and carbon-based linker “rods.” Chemists can swap out the hubs and the linkers to make nanosized “sponges” with many different properties. Historically, MOFs have been used for everything from capturing radioactive gases from spent nuclear fuel, to cleaning contaminated water and even storing hydrogen gas safely.

The Sandia team’s MOF nanoparticles glow red or near infrared for at least two days in cells.

Near infrared light has longer wavelengths than red light. It is especially useful for imaging inside a body because it can penetrate skin, tissue and even bone without causing damage, and produces clearer images because there’s less background autofluorescence at those wavelengths, said Sava Gallis. Current dyes or nanoparticles that glow in the near infrared don’t last for very long or only glow weakly, making brighter, more stable materials invaluable.

MOFs are complex materials with tunable properties and astonishing surface areas; one gram of a certain kind of MOF has the same surface area as 16 basketball courts. Sava Gallis said, “In the field of metal-organic frameworks, we have the advantage of choosing our building blocks to make made-to-order materials.”

For 14 years, she has been working on making the synthesis of MOFs more rational and predictable. Some metals are chemically active and others glow at certain colors. Some metals form clusters with different geometries — like tinker toy “hubs” with different numbers of holes — and sometimes the hub is a single metal ion. Some linkers are long, producing sponges with large empty spaces and high surface areas, and others are short. Some linkers are catalytically active — that is, they can speed up a chemical reaction — or can tweak the chemistry of the metal while others can adjust the color or brightness of the metal’s glow.

To rationally design MOFs for bioimaging, Sava Gallis selected lanthanide metals, a class of rare earth elements. The metal europium glows red; the metals neodymium and ytterbium fluoresce in the near infrared. She also chose conditions that would cause the lanthanides to form robust clusters. Frequently, MOFs made with individual metal ions aren’t water-stable, but metal clusters often are, said Sava Gallis. This is important for bioimaging as cells and people are mostly water. Also, she used commonly available carbon linkers that produce large pores.  Potentially, these pores could hold drugs and allow both imaging and treatment.

Water-stable, porous MOFs that glow in the near infrared

Sava Gallis put together a cross-disciplinary team to confirm the MOFs had the properties she engineered. Sandia materials scientist Mark Rodriguez and Karena Chapman, of Argonne National Laboratory, helped with the X-ray diffraction structural studies. Sandia researchers Lauren Rohwer and Willie Luk tested the MOFs’ luminescence properties. The team successfully made a family of similar MOFs with a range of emission colors from red to near infrared allowing researchers to “tune” the MOF color depending on what it might be needed for.

Then, Sava Gallis’ team tested to make sure the nanoparticles were stable in water and didn’t kill cultured cells. Sandia nanobiologist Kim Butler performed cytotoxicity studies to determine if the MOFs were toxic to mammalian cells. Even at high doses, the nanoparticles were similar to or less toxic than other particles being studied for bioimaging, which is a good sign for their future, said Sava Gallis. They were also stable in water or biology-mimicking saltwater for a least a week.

Sandia biochemist Meghan Dailey and bioanalytical chemist Jeri Timlin did live-cell imaging using a customized hyperspectral confocal fluorescence microscope. They showed the MOF particles can work for long-term bioimaging studies in mammalian cells but might need to be further optimized, perhaps by modifying the surface of the particles, Sava Gallis said.

“We are very excited about the success of these initial studies and are moving forward to investigate their tissue penetration depth, luminescence efficiency and ultimately, the relevance to imaging in living organisms,” said Sava Gallis.

The research is part of a much larger project to develop adaptable, safe and effective responses to biological threats and new pathogens funded by Sandia’s Laboratory Directed Research and Development program. An important part of that project is tracking the delivery of nanoparticles, which requires biologically stable glowing particles or dyes.

The results were published in ACS Applied Materials and Interfaces. The work was performed, in part, at the Center for Integrated Nanotechnologies, a DOE Office of Basic Energy Science funded user facility jointly operated with Los Alamos National Laboratory.