ALBUQUERQUE, N.M. – Sandia National Laboratories and the University of New Mexico (UNM) have created a powerful new way to capture carbon dioxide from coal- and gas-fired electricity plants with a bubble-like membrane that harnesses the power of nature to reduce CO2 emissions efficiently. 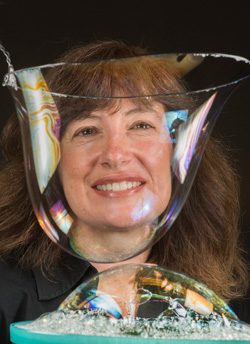 Sandia National Laboratories researcher Susan Rempe peers through bubbles. The CO2 Memzyme she helped design captures carbon dioxide from coal-fired power plants and is 10 times thinner than a soap bubble. (Photo by Randy Montoya) Click on the thumbnail for a high-resolution image.

CO2 is a primary greenhouse gas, and about 600 coal-fired power plants emitted more than a quarter of total U.S. CO2 emissions in 2015. When you include emissions from natural gas plants, the figure goes up to almost 40 percent. Current commercial technologies to capture these emissions use vats of expensive, amine-based liquids to absorb CO2. This method consumes about one third of the energy the plant generates and requires large, high-pressure facilities.

The Department of Energy has set a goal for a second-generation technology that captures 90 percent of CO2 emissions at a cost-effective $40 per ton by 2025. Sandia and UNM’s new CO2 Memzyme is the first CO2 capture technology that could actually meet these national clean energy goals. The researchers received a patent for their innovation earlier this year.

It’s still early days for the CO2 Memzyme, but based on laboratory-scale performance, “if we applied it to a single coal-fired power plant, then over one year we could avoid CO2 emissions equivalent to planting 63 million trees and letting them grow for 10 years,” said Susan Rempe, a Sandia computational biophysicist and one of the principal developers.

Membranes usually have either high flow rates without discriminating among molecules or high selectivity for a particular molecule and slow flow rates. Rempe; Ying-Bing Jiang, a chemical engineering research professor at UNM; and their teams joined forces to combine two recent, major technological advances to produce a membrane that is both 100 times faster in passing flue gas than any membrane on the market today and 10-100 times more selective for CO2 over nitrogen, the main component of flue gas.

One day Jiang was monitoring the capture of CO2 by a ceramic-based membrane using a soap bubble flow meter when he had a revolutionary thought: What if he could use a thin, watery membrane, like a soap bubble, to separate CO2 from flue gas that contains other molecules such as nitrogen and oxygen?

Thinner is faster when you’re separating gases. Polymer-based CO2 capture membranes, which can be made of material similar to diapers, are like a row of tollbooths: They slow everything down to ensure only the right molecules get though. Then the molecules must travel long distances through the membrane to reach, say, the next row of tollbooths. A membrane half as thick means the molecules travel half the distance, which speeds up the separation process.

CO2 moves, or diffuses, from an area with a lot of it, such as flue gas from a plant that can be up to 15 percent CO2, to an area with very little. Diffusion is fastest in air, hence the rapid spread of popcorn aroma, and slowest through solids, which is why helium slowly diffuses through the solid walls of a balloon, causing it to deflate. Thus, diffusion through a liquid membrane would be 100 times faster than diffusion through a conventional solid membrane.

Soap bubbles are very thin – 200 times thinner than a human hair – but are fragile. Even the lightest touch can make them pop. Jiang and his postdoctoral fellow Yaqin Fu knew they would need to come up with a way to stabilize an ultra-thin membrane.

Luckily, his colleague Jeff Brinker, another principal developer who is a Sandia fellow and regent’s professor at UNM, studies porous silica. By modifying Brinker’s material, Jiang’s team was able to produce a silica-based membrane support that stabilized a watery layer 10 times thinner than a soap bubble. By combining a relatively thick hydrophobic (water-fearing) layer and a thin hydrophilic (water-loving) layer, they made tiny nanopores that protect the watery membrane so it doesn’t “pop” or leak out.

Enzymes (the –zyme part of Memzyme; the mem– comes from membrane) are biological catalysts that speed up chemical reactions. Even the process of CO2 dissolving in water can be sped up by carbonic anhydrase, an enzyme that combines CO2 with water (H2O) to make super soluble bicarbonate (HCO3-) at an astounding rate of a million reactions per second. This enzyme can be found in our muscles, blood and lungs to help us get rid of CO2.

Rempe and her former postdoctoral fellow Dian Jiao were studying how CO2 dissolved in water, with and without this enzyme. They thought the enzyme could be combined with something like Jiang’s watery membrane to speed up CO2 capture. An enzyme-loaded membrane is almost like an electronic toll collection system (such as E-ZPass). The enzyme speeds up the dissolving of CO2 into water by a factor of 10 million, without interacting with other gases such as nitrogen or oxygen. In other words, the liquid Memzyme takes up and releases CO2 only, fast enough that diffusion is unimpeded. This innovation makes the Memzyme more than 10 times more selective while maintaining an exceptionally high flow rate, or flux, compared to most competitors that use slower physical processes like diffusion through solids.

However, the nanopores in the membrane are very small, only a little wider than and a few times as tall as the enzyme itself. “What’s happening to the enzyme under confinement? Does it change shape? Is it stable? Does it attach to the walls? How many enzymes are in there?” Rempe wondered.

Rempe and her postdoctoral fellow Juan Vanegas designed molecular simulations to model what happens to the enzyme in its little cubby to improve performance. Interestingly, the enzyme actually likes its “crowded” environment, perhaps because it mimics the environment inside our bodies. And more than one enzyme can squeeze into a nanopore, acting like runners in a relay passing off a CO2 baton. Because of the unique structure of the membrane, the enzymes stay dissolved and active at a concentration 50 times higher than competitors who use the enzyme just in water. That’s like having 50 E-ZPass lanes instead of just one. Protected inside the nanopores, the enzyme is still efficient and lasts for months even at 140 degrees Fahrenheit.

Working toward a greener future

Having successfully tested the CO2 Memzyme at the laboratory scale, the Sandia-UNM team is looking for partners to help the technology mature. Each part of the membrane fabrication process can be scaled up, but the process needs to be optimized to make membranes for large power plants.

In addition, the team is looking into more stable alternatives to the common form of the enzyme, such as enzymes from thermophiles that live in Yellowstone National Park hot springs. Or the Memzyme could use different enzymes to purify other gases, such as by turning methane gas into soluble methanol to produce purified methane for use in the natural gas industry.

The CO2 Memzyme produces 99 percent pure CO2, which can be used in many industries. For example, U.S. oil companies buy 30 million tons of pure CO2 for enhanced oil recovery. The CO2 could be fed to algae in biofuel production, used in the chemical industry or even used to carbonate beverages.

“Partnership between theory and experiment, Sandia and UNM, has proven fruitful here, as it did in our earlier work on water purification membranes. Together we developed a membrane that has both high selectivity and fast flux for CO2. With optimization for industry, the Memzyme could be the solution we’re looking for to make electricity both cheap and green,” said Rempe.

For a video on the CO2 Memzyme, click here.